Addressing the Bear in the Room 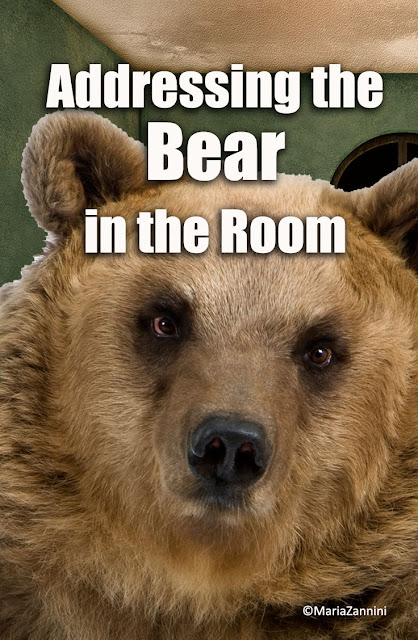 Should we discuss the giant bear in the room?

For weeks before Russia invaded the Ukraine, the US was giving out satellite intel on troop movements. These could've been nothing more than "exercises" as a means to intimidate, or as a false flag to make people think Putin was going to do one thing then do another.

But Russian forces did in fact move in at 4:30am local time.

A large chunk of the world ostracized Russia for the act, calling it a pariah. Others were quiet. Most of the quiet ones are getting (or hoping to get) Russian weapons for their 'friendship'.

China amuses me though. I suspect they're paying careful attention to how this is playing out since they too have eyes on a land prize of their own.

All that aside, what can we do to keep our families safe?

Even though Russia is attacking only the Ukraine, there are ripples.

Russian cyber attacks can be life threatening if they attack our infrastructure--and they can attack anywhere that is run by computer.

Another vigilante, the collective, "Anonymous" has announced that it's officially in a cyber war against Russia. They've claimed certain attacks that have put annoying, (but not life threatening) monkey wrenches into the Putin plan.

BP Oil and Shell Oil have cut ties to Russian oil. You know what that means.

Even though the US only gets 7% (some sources say 10%) of our oil from Russia, oil companies here were hiking prices long before the Russians fired the first shot. They do the same thing every time a hurricane is spotted in the Gulf--whether it hits us or not. It's just another excuse to raise prices.

If the price of gas goes up, so will transportation and manufacturing, and in a domino effect you'll see it at the cash register. This on top of the super high inflation we were already fighting.

Everything that happens in the world has a trickle down effect. How close you are to the epicenter decides how hard it will hit you.

Finally, let's not forget nukes. I never thought Putin dumb enough to use nukes, but the man has a planet-sized ego and right now it's taking a major bruising. There's no way for him to save face. That makes him very dangerous and unpredictable.

So what can we do to keep our families safe?

I pray to God that nukes are off the table, but it doesn't hurt to prepare for the possibility.

My main concern are cyber attacks which will disrupt our day to day living. It most likely will be short term until facilities can recover, but it could make our lives very uncomfortable, or at least, expensive.

So let's pretend it's March 2020 and stay close to home with enough food, water, and cash. Don't forget your meds and pet food.

I suspect Putin has another few weeks to decide how far he wants to take this. If he doesn't retreat (or is pulled from office), he's going to make us see how small the world really is.

My prediction is that this conflict will not go nuclear, but it will cost the world economically. The only thing Putin will accomplish is make everything more expensive for everyone all around.

In the end, only us plebeians will get hurt.

So what do you think will happen? Do you think you live in a safe place?

nightsmusic said…
While we're closer to Flint, we're still in the Detroit/Flint/Pontiac triangle and even though cyber attacks seem to be the way things are going now, the big plants that build the significant equipment are pretty much all around us so a safe place? Not really. People tend to downplay it now with the computer stuff, but I don't think so.

I have water, canned food, dried food stuff, a gas stove, a firepit in the back yard and enough wood to last me for a couple months. Beyond that, who knows? I also have a whole litany of things I could go on about what's going on, but I won't. Other than an opinion, I am a non-entity in the whole scheme of things right now. Scary times.
March 7, 2022 at 7:39 AM

Maria Zannini said…
nightmusic: I had to laugh when I saw the bit about the fire pit. I switched mine to an herb garden, but maybe I ought to switch it back to its original purpose.

re: I am a non-entity in the whole scheme of things...
Me too. But all we can do is share our observations.

Computer hacking is my biggest concern for us in the states--and that can happen anywhere.
March 7, 2022 at 7:54 AM

Mike Keyton said…
I think the pressure for a negotiated settlement will prove overwhelming. On the one hand. Putin has said peace could come in a moment if he keeps the Crimea, the two Russian areas to the east become independent, and Ukraine becomes strictly neutral. In other words a redline against further NATO expansion.
On the other hand China gets most of its wheat from the Ukraine and is wary of food shortage, the world gets most of its fertilisers from Russia and there will soon be worldwide food shortages, Germany remains dependent on Russian oil. America can’t really afford distraction in Europe and face down China at the same time. So, will we be stupid enough to stumble into World War III - — possible; will we allow Ukraine to become another Syria, immoral. Or will face-saving sanity prevail? In the words of that great diplomat, Mick Jagger, “ You can’t always get what you want, but if you try sometime, you just might find, you get what you need”😎
March 7, 2022 at 2:07 PM

Maria Zannini said…
Mike:
Mick might be wiser than we knew.

Luba Meader said…
Maria, I love your posts and checked off quite a number of items I already have for a JUST IN CASE MOMENT! I'm with you, with any luck we'll get through this. Thank you for posting some other stuff, that I will be getting from Amazon. I do not have goggles so I will get some. And I'll see about protecting my devices...

Maria Zannini said…
Luba: It would be nice if we could all play like nice children but there always has to be a bully (or three) in the playground. One of these days someone is going to wreck the whole playground.
March 9, 2022 at 6:31 AM