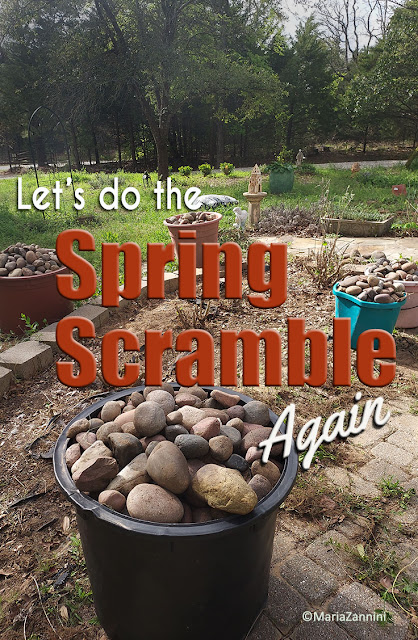 I've been working steadily on one part or another of the outdoors while Greg intermittently works on finishing the bathroom.

The good news is that he's nearly finished. I think all he has left to do is the shower floor and grouting. The glass door and half wall should be here in three weeks.

The glass guy seemed honest and very precise. I liked him best even though his prices were slightly higher. Sometimes you just have to go with your gut. We shall see in three weeks.

I have worked nearly nonstop on one project or another. It's the endless cycle of cleaning pens, cages, weeding, mulching, cutting brush then moving brush and dead limbs to the burn pile. I still haven't gotten my seedlings in the garden yet. (A story for another time.)

Now I'm up to tidying up the front yard. Interpretation: Ripping everything out and starting over.

The last time I dolled up the front yard was about five years ago. Since then the weed barrier underneath my neatly manicured growing area had given up the ghost and weeds were taking over.

Even a small bed where I had carefully planted sage then surrounded them with large river rocks was now laced with long trailing fingers of a pretty, but invasive ground cover called vinca minor. I like the plant, but I want to decide where it grows.

After the weed barrier failed, a lot of the river rocks sank 6-8 inches. The soil is very soft there. (That's where I found a nest of 12 inch baby snakes.)

Thus began six hours of painstakingly digging out each stone. Thankfully, Greg came out to help me for my seventh hour and we managed to finish.

The next step is to clean out the bed and reline it with weed barrier cloth. If it goes out again in five years, I'm hiring someone to clean it out.

Which brings up a point where I'd like some feedback.

Every year I "threaten" that I will hire someone to weed, or turn over beds, or some other back breaking chore. I never do, but someday I think I will.

What I would like is to hire a high school or college kid. Someone who really needs the extra money. But I worry in this litigious society that if he/she trips on a vinca minor vine, gets impaled by barbed burrs, or stung by a scorpion they'll hold me responsible.

Greg says I should stick to bonded and insured landscapers. But I want to help the kid starting out. I remember how it was for me. I was always desperate to land well paying jobs in between school terms.

I realize it's different than it was in my day where we didn't sue for every little thing. As long as we didn't get maimed, we got over it. It was part of the job.

What do you think? Would you let your kid work in someone's garden despite the danger of snakes, scorpions and  blazing sun?

I have two more days until the rains start again, so I want to finish up and call it a wrap for the flowering part of the front yard.

I'm throwing in the towel on the cottage style garden I had hoped for in the front yard. I do nearly all the garden work and it's just too much to keep up what with the back yard maintenance, the main vegetable garden and Greg's garden (which somehow I've ended up tending).

I dislike vast lawns. Unless you have kids, expansive lawns are nothing more than wasted space to my eyes. I like to see useful and pretty things in my yard.

But I've given up. Later this year, once everything is tidy again, I've decided to break up the front yard by creating a rock border and slightly terracing the land so I only have a small patch of lawn in the middle.

My front yard is HUGE so even a small lawn still works out to be a fairly substantial patch of green. It'll be a compromise between what I want and what Greg likes.

I'm grateful for the coming rain. Not just for my plants, but for my back. Every day the weather's been fair I've been out weeding, cleaning, trimming, mulching, and planting until I can't stand or I can't see. I trudge back into the house like a half-dead horse.

I'm getting too old for this sh....well you know the rest. 😉

Come Wednesday, I am going to lay on the couch and recuperate for two solid days.

So, what do you think? A broke kid in need of cash, or a licensed and bonded landscaper?

What's going on in your world?

nightsmusic said…
Well, I have three acres of 'lawn', at least a half acre of which is flowerbeds and vegetable gardens. The first couple of years we were here, I was still working and did nothing to the au naturelle gardens and beds the previous owner thought were wonderful to own so I was pretty much carving out all new when I finally started clearing them. It took me three years, but they're low maintenance now. I did the weed barrier, I use cedar mulch to cut way down on the bug situation, I left a few spots for the Blanding's Turtles to lay their eggs since they're a protected species here and for some reason, our acreage is their nursery, I leave a lot of the fall stuff go so all of the moths, butterflies and overwintering beneficial insects, snakes and things are good to go in the spring...in another week or so when things finally warm up enough, I'll start outside. But I too am getting a little old for all of this.

To the liability, I'd be more afraid they'd turn over and pull things you want to keep. I'm trying to find a place to plant my morels and ramps this year. They have to go where there are other shade/moisture plants. I'd be afraid the whole lot would be gone if I let a teenager around them. Then again, you never know with 'pros' either. :/
April 12, 2022 at 2:21 PM

I have good neighbors but they're marginal gardeners at best. The older neighbors have moved out and downsized to smaller homes. Now Greg and I are the "old" people. :)

Like you, I don't like to disturb spent flowers or fallen leaves until well after winter. It gives shelter and food for those creatures who still need them.

re: teenage carnage
Yeah, I hadn't thought of that. But like you said, you can't be sure of pros either. I've heard stories of pros mowing down entire beds thinking they were weeds.

I guess I'm better off with pros, but I'd still like to give young people a chance if they're willing to learn.

When we were in our 30s we had the good fortune of having the best neighbors in the world. They taught us so much about living off the land. They were in their 70s and have homesteaded since they were kids. Their son had no interest in the lifestyle, but we did. They've been gone nearly 15 years now. I miss them so much.
April 12, 2022 at 2:54 PM

nightsmusic said…
Oh, Maria; we too are the 'old' people now...

I could almost be a homesteader now but I couldn't be 100% because I could never kill for food. I'd be one hell of an egg eater and I'd have to have a lot of chickens and trust me, I can cook an egg 100 different ways, but I can disassociate myself from that steak in the grocery store. I couldn't do that if I were to look it in the eye first. Not a chance.

When my girls were young, they wanted to help me weed. That was a mistake. Thing 1 has gone on to be a good gardener. The only thing that Thing 2 has in common with working in the yard now is her last name.

Maria Zannini said…
nightmusic: LOL. I remember when we showed one of our young nieces where potatoes come from. The next thing we knew she was digging up the entire bed!

I've been happy that we've managed to introduce several young nieces and nephews to gardening. They may never garden again, but I hope we gave them good memories. That, and the knowledge that food comes from the farm first and the grocery store second.
April 12, 2022 at 4:22 PM