Caring for a Post-Op Knee Patient 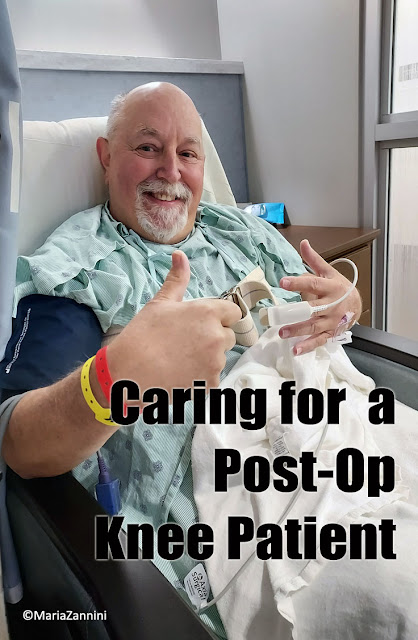 Greg is home after his first total knee replacement.

My first bit of advice is: only get a knee replacement as a last resort. It's not for the weak of heart.

It hurts. A lot. For at least two weeks.

There are thousands of knee surgeries performed every year. To all you tough survivors, I salute you. I also salute the caregivers. If your experience is anything like mine, you lose a lot of sleep and you get to learn how strong you really are when lifting dead weight up from a sitting position.

Greg had no choice but to get this surgery. Even the surgeon said it was incredible he had endured the pain for so long. The ball joint had eroded into a flat tire. Every step he took was torture. (He was supposed to get it replaced over two years ago, just as the pandemic started.)

The first day is easy--other than waiting for the surgery to be over, and then the long hours until they think you're stable enough to be released. Since Greg still had the nerve block, he felt great. He didn't know what all the fuss was about...until the next day.

By mid afternoon just before he was to attend his first therapy session, the pain flooded over him like a burst dam. I had given him his pain medication before the pain started, but it wasn't enough.

The therapy, interestingly enough, helped a little in loosening the muscles, but by the time we got home, he was in deep pain again. Ice is your only friend at this point.

There were a few things I wasn't expecting.

I didn't realize he would be so helpless. Greg outweighs me by 80lbs. It's hard to lift a man that big especially when both of you are old.

I got down to a squat which thankfully I can still do, spreading my legs wide to support the extra weight. At the count of three, we rose up together. Sometimes it didn't work. He was too weak.

But as the days went by I could tell he was getting stronger because we were able to lift up on the first try.

I wasn't prepared for mid-night bouts of extreme calisthenics. The first couple of nights, involved me having to get up to help him to the toilet or to help him move his surgical leg after it had shifted during the night. It is critical the knee be supported. That's really hard to do in bed when pillows and bodies shift. Honestly, these were not things that ever entered my mind, which is why I'm writing this post.

Poor Greg has been sleeping on our reclining sofa. At least it keeps him from rolling over on that knee. That was a very painful lesson.

I am very happy to report that the dogs have been angels. They realize he's hurt and they keep their distance unless they're summoned.

My days are busy. While he's in the bathroom, I feed dogs/cat. When I know he's safely back on the couch, I feed him, then ice his knee. After he's eaten he can take his pills. By then he's in so much pain he can't wait to take them.

While he's resting I go out and feed the outside animals, water the garden, and harvest any vegetables ready to eat. The dogs stay with me so they don't accidentally run into Greg. We both have our phones so if he runs into trouble, he can call me.

I made it a point to take care of any big jobs, like cleaning pens, weeding, and mowing before I took him in for surgery. It's so hot right now, with no chance of rain, that with luck I may not need to do any of those jobs again for up to two weeks.

Once I'm back inside, I offer him lunch. Ironically, he doesn't have much of an appetite. He eats, but not as much as before. I make sure he's not running a fever. He does have some bad bruising around the knee, but that's not unexpected.

Because he's diabetic he doesn't heal quickly. With that in mind I made doubly sure while in the surgical center to wipe down any surface he touched with bleach wipes while he cleaned his hands with alcohol wipes.

We had a scary few days just before the surgery. We'd been invited for dinner by neighbors. Two days later they informed me one of them was positive for covid. I tested Greg immediately. Thankfully, he was negative.

Speaking of covid, Greg had a wonderful RN who looked after him in recovery. I took the time to ask him how things were in the hospital during the pandemic. He said they shut down (the surgical side) for 3 weeks (in 2020) to assess and create new operating protocols, and then they opened up just like before.

The media made it sound like all these hospitals were void of any patients other than covid patients, and that simply was not true, at least not here. You can't trust the media.

The surgical center was one of the best I'd ever been to. They took excellent care of Greg and kept me informed via text messages on where he was in every step of the procedure. Every nurse and doctor in the OR introduced themselves to us and made sure we understood the surgery. I was especially grateful Recovery was in a private room.

Greg's Recovery nurse was a Registered Nurse called Luther. He was incredibly patient and kind. No matter what was happening around us, he monitored Greg like a hawk. They even brought us both lunch, which was good because neither of us had eaten for over 20 hours. And I was so sleep deprived by this time I was struggling to stay alert. The food helped a lot.

There's another post to be written on what I learned. I realize now that while we can put handholds in the shower, and levers instead of knobs on doors, there are way more things we should be considering in our house as we age in place.

Even if you don't have an elderly person in your home, do make plans on home improvement if you anticipate major surgery. Trust me, you won't have time to put all these things in place after the fact. It's one less thing to worry about while you're recovering.

We could have applied for an at-home nurse or sent Greg to a nursing home for rehabilitation, but home is best among people you trust. Do whatever you need to do to make you or your patient feel comfortable and safe.

When you're suddenly incapacitated, disabled, or too ill to care for yourself you need all the help you can gather. I never thought I would need toilet seat risers, walkers, or adjustable-height tray tables, but each of these things serve an important purpose.

Whether you have elderly family living in your home or are dealing with your own disabilities (temporary or permanent) get whatever equipment you need to make your life easier. If you're not sure what you need, ask your doctor. They'll guide you to the right equipment.

nightsmusic said…
I'm so sorry you've had this experience! I don't know how old Greg is nor how much he weighs. I can tell you that Jimmy turned 66 in April and is still losing weight but I think he was still at 380# when he had the surgery. He's also 6'5" though so unless you were told how much he weighs, you'd think he's 100 pounds less than that, but there is no way I would ever have been able to pick him up from anything. He spent one night in the hospital and started his therapy the second day in the hospital and then the day he came home at the therapy facility. He did have rough nights trying not to roll over on that knee so spent most of his nights in the La-Z-Boy and said that sleep was the worst of the whole experience for him. But we bought an extra large shower chair, extra large walker and an awesome ice machine and they were a godsend along with the Tylenol which is really wonderful for deep bone pain. Probably the first week was the worst for him but I made him get up and do for himself if I thought he could. I'd waited on him enough and knew the more he moved, the better off he'd be. In six weeks, he was back to work with a cane and now he's hardly using that. His surgery was March 14th. Back to work May 2nd and working 6 weeks now. And now that he's forgotten everything he went through, he's planning on getting the other knee done early next year.

Everyone's situation is different. We had to see a surgeon who does revisions to fix what other surgeons mess up because his knee was so far gone no one else would touch it. He was amazing, the hospital was wonderful, the 'physical terrorists' were great, but it's all up to the patient of course how far they come after the surgery. I wish you both the best of luck.

If you can afford it, this is what we bought. Best investment we made for this and he's still using it when he needs to but now, for the other knee!
https://amazon.com/gp/product/B07H3GW4W7/

Maria Narkis said…
Wow ... that's a lot of information, and good to know. I've talked to people who've gone through the surgery (including my own brother and his wife) and no one has given the hard parts like you have. I appreciate it.

It's got to drive Greg a little crazy being so dependent. But I'm betting once he's healed, he'll be so happy being mobile again.

Maria Zannini said…
nightmusic: The ice machine is a great idea. I'll show it to Greg and see what he thinks. Thanks!

Jimmy is way taller than Greg but I'm a shrimp so there's only 8 inches difference between us. I can fit just under his arms to help him up.

Like Jimmy, the worst part of this surgery is being able to sleep. Nothing is comfortable at this point. I'm glad to hear he's back to work though after only six weeks. Our surgeon told Greg two months, so that's my timeline to get him strong again.

I am a little concerned about the loss of appetite, but I'm sure it's because he's not feeling well.

re: physical terrorists
LOL! He's going to get a kick out of that.

Maria Zannini said…
Maria: Try as I might to get all the information I could, nothing teaches you like experience. Even little things like wearing those socks with the little grips on them. They are lifesavers!

Everyone's situation and house is different, but you learn very quickly where you're deficient and what your needs truly are.

nightsmusic said…
Maria, that loss of appetite is the pain meds. Jimmy went through the same thing. As he weans himself off those, his appetite will return. Not to worry. If you have any questions, feel free to reach out. I'll answer whatever I can and while I know everyone's situation is different as I said, I also worked the ortho floor for a year before switching hospitals so I have some experience other than Jimmy ;)