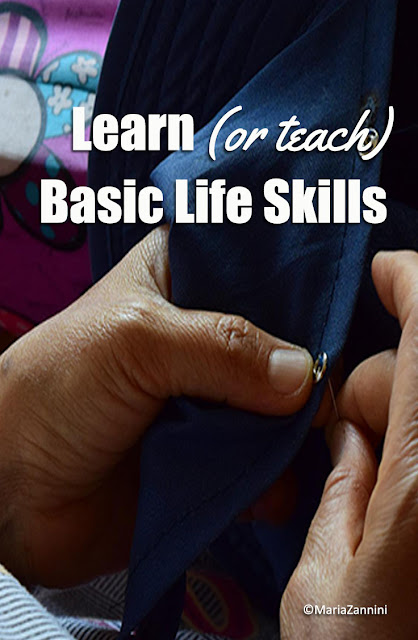 We had an interesting conversation with a bank manager a few weeks back. I mentioned that I didn't understand how online banking worked. (We made a payment to a business and because it was a large amount, it was holding the check for "processing" for over a week.) In this day and age of digital communication how long can it take to check someone's balance for funds?

She explained the process and we got on the subject of what younger people didn't understand.

Some people under 30 don't know how to use a dial phone. Others can't drive stick shift. One young person at the bank had never learned to read the hands of a clock. The manager's own son didn't know how to sew on a button. Schools today don't even teach cursive.

One time, I totally blew someone's mind when I gave him exact change after he keyed in the $20 he saw in my hand. He didn't know how to make change without a machine to help him. It was sad!

Greg relayed the story of a young woman standing outside her car crying to her father on her phone. Her door was locked, she was late for a job interview, and her key fob had stopped working.

Greg asked her if he could help. She explained her story, so he asked to see her electronic key fob. He looked it over and unlatched the key hidden inside then opened the door for her.

Now if her key fob had been one of those without a hidden key, she was still in luck. They were both in a Walmart parking lot. She could've just gone in and gotten a new battery for her key fob.

While older people sometimes have trouble deciphering digital data or social media, younger people stopped learning the most basic skills. Who doesn't know how to sew a button, unclog a toilet, or balance a checkbook? Yet it happens all the time.

You don't do your kids any favors by doing stuff for them. To the manager's credit her son did know how to cook for himself and do his own laundry. In fact, since she's had a full time outside job since they were little, all her children and her husband did their share of cleaning and cooking.

I don't blame her much on the sewing. I've only ever replaced two or three buttons in 60 years.  I hate to sew, but my mom taught all of us the basics. I've had to hem many a pair of pants and skirts to fit my shorter stature.

I'm not knocking young people. It's part of our social culture. You may never have to change your own tire, but wouldn't it be nice to know if you're stranded somewhere?

The only other advice I would give a young person is that no matter what you do, always have a backup plan. Life has a way of throwing you curve balls. If you prepare for the 'what ifs', you're less likely to stress out when things go wacky. And they will go wacky when you least expect it.

My question to you: Have you noticed a lack of understanding for basic skills in the under-20 generation?

I'm glad my mom forced me to learn things that I hated. I still hate sewing, but it's better than paying someone else to mend my clothes.

Happy Independence Day to my US friends!

We have a full week this week thanks to more PT for Greg, to Odin who did injure his eye right after I told the vet he was getting better, and hubby again who decided to please me by turning another year older. I'm making him a sugar free Italian cream cake for his birthday. I hope it turns out okay.

nightsmusic said…
This might be long, but here goes.

I learned to do washing on a ringer washer. First on a manual one and then, luckily, on an electric one. I can still clearly hear my mother's voice telling me to keep my little fingers clear of the rollers or they would be gone. She had no dryer until we bought her one when I turned 28. She very grudgingly accepted the gift and rarely used it.

I made ALL of my own clothes from the time I was about 8, on a Singer treadle machine. Until that time, my mother made them. The only exception was my jeans which only came in one gender (men's) and were bought at the local tack shop. When I was in high school, Levi's finally realized women were built differently. Now, I'd be hard pressed to buy from that company, but that's another story.

We had rotary phones when the girls were little. We kept them for the simple reason that we wanted them to know how to use one.

The girl's elementary school was the pilot program for our local credit union. They came in when the girls were in 2nd and 4th grades and would set up once a week in the common room and the kids ran the 'bank'. You had to be in at least 4th grade to be a teller, but they learned all the basics I hadn't yet taught them (they already knew how to make change from me by this time) as well how to do deposits, withdrawals, balance a till and all sorts of other things. It went on every year so my oldest got two years worth and my youngest got four year's worth of invaluable information which simply is not taught in school. They both opened accounts when it started and to this day (they're in their 30's,) still have those accounts. My oldest has paid off her and her husband's student loans, my youngest is almost done with theirs, it's paid off ten fold and was all free for the learning.

We taught them to drive a stick because both my husband and I have every day drivers that are automatics and classic cars that are sticks and wanted them to be able to use the classic car in case of an emergency (heart attack should they have to drive it not withstanding because it would scare the s*** out of us if they did!) but it needed to be done.

They can change their tire, their oil, check the tire pressure, understand all the gauges on their dash, understand what they all mean and what happens if they're not right, know where their emergency keys are, how to unlock the garage door from the inside if the power goes out so they can get out and a hundred other things almost no other kid their age or younger knows. They can bake, cook, sew, garden, grow veggies, survive on their own, survive in the wilderness, survive without us. That was our goal and they've met it. We can do no more.

Maria Zannini said…
nightmusic: That's a bit pricey for toe removal, even with cancer treatment. But then we haven't needed cancer treatment for any of our guys for nearly 15 years. I'm sure it's gone up.

My grandmother had a treadle. It fascinated me to watch her sew. My mom couldn't afford a sewing machine for quite a few years. I remember her only sewing by hand.

We have no children, but I'm more than happy to teach nieces and nephews the ins and outs of homesteading and all it entails. So far, only one has taken us up on it.

I'm not opposed to modern conveniences, but when you forget (or never learn) how to do things manually I think you cheat yourself.

And to put the shoe on the other foot, I taught myself how to code a web site from scratch. I could've just bought a ready made template, but I really wanted to understand how everything works in the background. I'm no expert by far, but I have a basic understanding how coding works.
July 4, 2022 at 4:02 PM

nightsmusic said…
I still have that sewing machine. It still works. And I too taught myself how to design a website. I am a curious person :)

The dog... *sigh* Well, the initial visit was $450 for the blood work and x-rays and everything involved with that. Then the surgery was $1800, then the revision was another $800 but that was just for the room, anesthetic, techs and such, I didn't have to pay for the vet's services again. Thank goodness the biopsy charges were included in the surgery costs. Oh, and the five days to medically board him before the surgery because being cancer, he wouldn't leave the site alone and nothing I did made a difference. Even with the cone of shame, he managed to cram his butt against the hearth, shove his hind foot in his mouth and chew away to his heart's content. I couldn't get it to stop bleeding, couldn't get him to leave it alone, was losing my mind, it was awful. So he stayed five days before and four after. That wasn't cheap! But worth it.

Our Red Boy, who we took to Michigan State because his mother stepped on him as a baby and injured his growth plate, had his fibula and tibia grow like a bow from a bow and arrow. They ended up having to break his tibia and pin it and then he wore an external halo that had to be adjusted every three days that I had to take him back for and this was...I want to say probably 20 years ago now. That was $1200 at the time, so all things being equal, this cost was about right. Unfortunately. Hey! Hub's knee was $42K! This wasn't bad! LOL
July 4, 2022 at 4:21 PM

Maria Zannini said…
nightmusic: We haven't even seen the bill for Greg's knee yet. They say Medicare will cover all of it. Hope so.

The most we ever spent on a dog was Nana. She needed both knees worked on (ACL). We spent $8,000 on both legs.

Since then hubby joined a group that talks about their dogs' ACL surgeries. She did beautifully compared to so many others. I give a lot of credit to her surgeon. I'd never seen such a nice job done and I used to be a veterinary surgical assistant.

The other half of that equation is that we were diligent not to let her put weight on that leg for the required time. It was tough, she being a border collie and not accustomed to being still, but she has a mom as stubborn as her.
July 4, 2022 at 4:50 PM