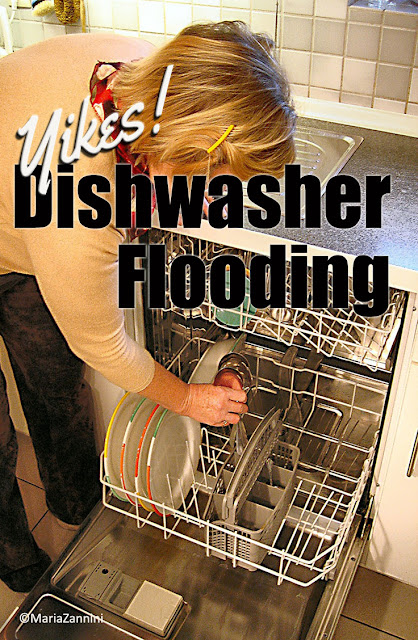 We have a very nice Bosch dishwasher. It does everything but tell you when it's about to blow a line and flood your kitchen floor.

And that's exactly what happened.

But let's back up. There's a teachable moment here that we learned the hard way.

My dishwasher gave me an error code, telling me that water was not being transported so it shut the machine. After checking a few things we found the problem in a filter. One of my glass cutting boards with the rubber feet lost its feet during a recent cycle. I found only two of the four in the filter basket.

It ran fine for quite a few more weeks when somehow those two last feet managed to make their way to the final filter that flushes the water out of the system. It's a relatively small pipe and those two little rubber bumpers kept the machine from finishing its cycle.

We ran the machine several times before pushing it back into its alcove. I was quite pleased that it was nothing complicated.

Satisfied that all was now well, I ran a full load overnight.

The next morning I found water making its way out into the breezeway outside. It traveled more than 8 feet to reach the door outside.

We frantically grabbed every bath towel and started mopping up the mess. We cranked the air conditioner to Frigid, and had a fan blowing on the now thoroughly warped wood floors.

Ah, yes. Did I mention I have wood floors?

So what happened? Why did it run absolutely flawlessly for six cycles and then decide to flood after we put it back into its alcove?

Our first guess was that the hose kinked, but no, the water didn't come from the hose. It came from the fitting on the dishwasher itself. When Greg checked it, it was loose.

I know he installed it perfectly when we got the machine. It worked fine for two years with nary a problem.

The only conclusion he could come up with is that constantly running the machine with very hot water will contract and expand fittings, compounded by normal vibration, will eventually loosen the fitting. It was sheer coincidence that it happened after we moved it back to its cubby hole.

He should've checked them before moving it back, but who thinks of that after it had run so well? Lesson learned.

But now we have a warped floor.

I think we dried it thoroughly. We were living in an igloo for days just to be sure all the moisture was drawn out.

We could have the floors resanded and stained, but we're going to ask for a quote on tiling at least the kitchen and a surrounding nook. I never thought having wood floors in a kitchen was a good idea anyway and now we have the chance to fix that.

I'm not looking forward to that quote.

Anyway, if you have a dishwasher, always check the fittings if ever you pull it out for any reason.

Wish me luck that this estimate won't flatten us. If push comes to shove, we can always have the floors resanded.

What's the last weird catastrophe that's happened to you?

In other news, Odin's eyes are looking great despite how they looked immediately after surgery. He's keeping his stitches at least another month so the scar tissue holds his eyelids in the right position. Fingers crossed.

We had not so great news with Nana. Her thyroid is a little low and a couple of her liver enzymes are a little high. Nothing disturbing, but enough to keep us wary.

I've changed her diet. She eats only a handful of kibble, but the rest is whole food (chicken, beef, and liver with a variety of vegetables). Rabbit is a very good meat for a dog diet. I'd hate to raise rabbits again, but I'm considering it. We'll recheck her in another month to see if the diet has helped.

So what's new with you?

nightsmusic said…
I too have wood floors in my kitchen that are now warped thanks to a discharge tube on my old Kitchenaid that was leaking. It dripped at the back of the dishwasher and ran under the floor, most likely for months and months and wasn't caught until finally, it split open and flooded my floor. I knew something was leaking, I'd see it occasionally, but I'd clean it up, open and close the door and thought it was a seal on the door that wasn't seating properly.

When the dishwasher finally bit the dust and completely flooded my floor, we pulled it and found mold covering the floor beneath. I'm sure there's mold underneath the hardwood all the way from the dishwasher opening to the other side of the kitchen. I haven't pulled the wood up yet. We're redoing the kitchen next year. It will have to wait. But we treated under the sink, bought a cheapo dishwasher for now and believe it or not, will buy a Bosch when the kitchen is redone, in part because they're a sponsor on the car Jimmy builds the engine for so we get a discount. And I've owned Bosch in the past and been happy with them.

When we bought this house, the wood floors were here. We've done CaliBamboo through the rest of the house, but I'm debating that or tile when we do the kitchen. I originally wanted to sand and stain close to the new floor color, but now...

Thrilled about Odin! Wary about Nana and hoping things get better there. Please don't tell me about rabbits though. Thing 2 rescues them and has had several as house pets. They make wonderful pets...

I think the loose fitting was totally a fluke. I still like Bosch.

I never thought it was a good idea to have wood floors in the kitchen, but that's the way the house came to us. And it's solid wood too so I was hesitant to change it.

Mike Keyton said…
That’s awful, Maria. I’m glad things are sorted , and yes, tiles are probably the way to go. One word of warning ref dishwasher on overnight. There are worse things than flooding. Good friends of ours had their kitchen destroyed by fire — from a rogue dishwasher
August 23, 2022 at 7:18 AM