In Search of A Less Complicated Life 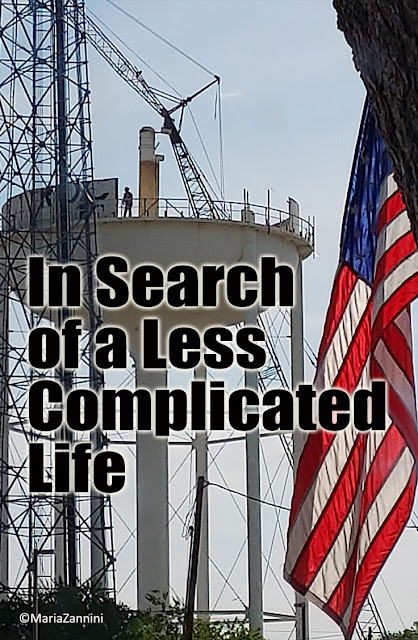 It's been a few weeks of drama, but I hope it can dwindle down in a couple more weeks. Honestly, I can't remember when one day ends and another one begins.

This picture above is a water tower being dismantled in the city closest to us. The only reason we can think on why they'd do that is because land has become too valuable in that area. They'll probably move it to a less desirable location.

Today, I'm at jury duty. Hopefully, this time I won't have to serve. I just want one day where I don't have the sword of Damocles hanging over my head.

My poor sister had to put her precious Riley to sleep last week. I know firsthand what a hard decision that is. What you have to keep telling yourself is that you're doing it for your baby. When the quality of life diminishes to mere minutes at a time, you're doing him a kindness. There is no greater love or sacrifice.

I had only so-so luck with Odin and his eye problems. The specialist, (whom we liked very much) seems to feel that the temporary tacking of Odin's eyelids may or may not solve the problem. We'll know more in a few weeks to see if the lids still turn once the sutures are out and if his eyes are still weeping.

The bad news is that the surgery will cost $3300. The good news is that if we go through with it, I feel Odin would be in good hands. This vet was phenomenal. I watched him carefully as he examined, measured, and assessed Odin's eyes. The man's probably forgotten more than some vets ever learned. I was very impressed.

We're on hold with Odin for now.

Nana is beginning to worry me more. I'll take her in next week for a teeth cleaning and a thorough exam. I don't like how she loses interest in things as the day wears on. That's not like her at all.

Greg is doing so well. I need to write a review on his surgeon. He did a great job. Greg still tires out quickly, but the pain in minimal now. If it weren't so hot we'd be out walking to build up his muscles.

Greg belongs to a lot of groups that keep a tally on what everyone's military is doing. You'd be surprised what you can find out if you know where to look.

There were American planes refueling near Australia, drones fighting Russians, Chinese fighters too close to Taiwan and India. And where are all the subs patrolling? There have been reports of Chinese fighters deliberately taunting American fighters over international waters. What reason would they have but to start a shoving match.

I think all the players are putting their pieces into place. Maybe it's just precautionary in case someone has a trigger finger on a nuke, but I don't like what I'm seeing.

Winter is coming for people in the Northern hemisphere. It's a bad time to escalate. Not that there's ever a good time for war, but if we lose power during frigid temps, or if shortages return, it can be hard for the average family. I worry most for people with kids, though I suspect kids will be more resilient than adults.

We only have the one solar generator. It's enough to keep the essentials on. Other than that I plan to buy a winter coat. I say that every year, but this year I will. I can't put it off anymore.

On the lower end of the annoyance meter, some no good, rotten company must've sold my info to a third party because I'm getting tons of spam. They didn't get the main account, thankfully, so I might delete the other accounts once I create new email boxes to replace them.

For weeks, Firefox was unable to show me a proper Amazon page (no buttons or links), which forced me to refresh Firefox. (Their idea.) What they don't tell you is that when you refresh you also lose all your saved passwords and cookies.

I got Amazon back but I lost my cookies. Firefox was no help in getting them back. Geek Squad to the rescue.

Does anyone else use Firefox? I've been reading that they're on a downward spiral. It certainly seems that way when it comes to the quality of their browser. Every other week they seem to be updating. It might be time to switch. I've never cared for Chrome's interface much but I'll go there if I have to.

How about Microsoft Edge? Has anyone used them yet? I'd be interested to hear your take on them.

What's been your browser experience lately? And you Apple people don't count. LOL! We already know you sit at the right hand of god.

B.E. Sanderson said…
We use Brave as a browser. It's minimally invasive and good at blocking trackers and ads.

I'm sorry to read about your sister's dog. It's so hard to lose a pet. I'm also sorry to see that Odin's having eye problems. And that Nana's worrying you. :hugs: Yay for Greg doing well, though.

Right now, worrying about the world is low on my totem pole. I don't have the time or the mental space for it. The powers currently in charge backed me into a corner and I had to get a job, so my brain is all wrapped up in that. And when I'm not there, I'm trying to decompress and deal with life. :shrug: The conspiracy theorist in me wonders if this is part of the plan. Keep the peasants busy, so they won't have the time or the energy to rise up.
August 1, 2022 at 7:05 AM

I'm not so much worried about world battles as I am about shortages or losing power. Around here we lose power if someone sneezes, so it's always on my mind.

nightsmusic said…
I'm so sorry about your sister's dog. I've been there too many times. It's always heartbreaking, even though you know you're doing the right thing.

I switch off between Opera, Firefox, Vivaldi...I'm trying not to use Chrome unless I'm using it with a VPN. Chrome has become nothing more than an information aggregator. I like Opera, but it takes time to set up. I know, cart before the horse, but when you find one you like, set up a weekly schedule to back up your cookies and such. And use something like BitWarden for your password manager. Not the browser's. They're still stored on your computer in your profile and you can find that information and import it if you Google how to, it's not hard to do at all, but you shouldn't have to. That info has just been renamed.

I will never use Edge. Never. And I quit Brave when they started getting too intrusive. And if you read their support community pages, most of their support questions/answers have to do with their incentives/ads/wallets/payouts and I don't like that at all either. They're selling your info somewhere to get that stuff.

My spam has increased exponentially again as well. It goes in spurts though. It will be months where I see very little then I get tons, then very little again. What irritates me now is the spam on my text messaging. If all of the candidates thought they had a chance in hell of getting my vote, that went out the window with the 20th spam text I got to vote for them. Not happening now! And then there's the "I've tried reaching you several times with a fantastic offer on your home!" Well, no, you haven't or your number would have been blocked the first time and this text would have never gotten through! *sigh*

Greg needs to keep doing his exercises and needs to be increasing them to build up his stamina. That will help with his tired, but hubs still gets tired at the end of the day as well though for him, he's now fighting through the pain in the other knee that also needs to be done. But walking is good too. Take it a little farther every night.

And buy a winter coat!! Even if I lived in Florida, I'd still have my LLBean 40 below Parka. You just never know.

Maria Zannini said…
nightmusic: All these browsers. I'm going to need a quiet day when I can check them all out.

re: coat
I know. After the arctic blast of February 2021, I found out the hard way I need a warmer coat.

Angela Brown said…
Glad to hear Greg is doing so well. That is wonderful!

Nana is a special darling so extending prayers and hugs for her and your whole family.

I use Chrome for my personal browser, which some love and some detest. For the working gig, I use MS Edge. No commentary for against either as they serve my minimal needs well.
August 1, 2022 at 11:29 AM

Maria Zannini said…
Angela: I've never given Chrome much of a chance. I only ever used it when Firefox was misbehaving.

I pulled up Edge last week to take a look at it. I didn't like that it didn't give me an option to *not* update. Sometimes when Firefox was doing something weird, it would let me go back to an older version. Edge won't even give me the option.

Mike Keyton said…
The right hand side of God indeed. Been trouble free for seven years since moving to Apple in 2015. But on to more serious things, where to comment on so many topics in one post. My little brain's zinging. I thought the water tower removal a useful symbol for more potent conspiracy theories eg the growing number of fires in food production plants throughout the country. But what isn't a conspiracy theory is the oncoming planetary upheaval with food shortages, energy shortages and national debt in the developing world. Ref migrant crisis, we haven't seen anything yet. I assume Greg has added that to his mix of elites on manoeuvres. And yes - buy that winter coat. What's wrong with you : D

Maria Zannini said…
Mike: You Apple people think you're so special, don't ya?

re: migrant crisis
Greg is a military buff, particularly of the WWII era but he loves planes and all the new tech. That's how he got on those sites.

I'm rather mixed on the migrant crisis. As much as I don't want people living here illegally, what most Americans don't realize is that Mexicans do most of the work others wouldn't take. They're not taking jobs away from us but they are using up our resources. There needs to be a middle ground where all needs can be met.

On the other hand illegal entry also allows terrorists to blend in with the native population.
August 2, 2022 at 7:41 AM