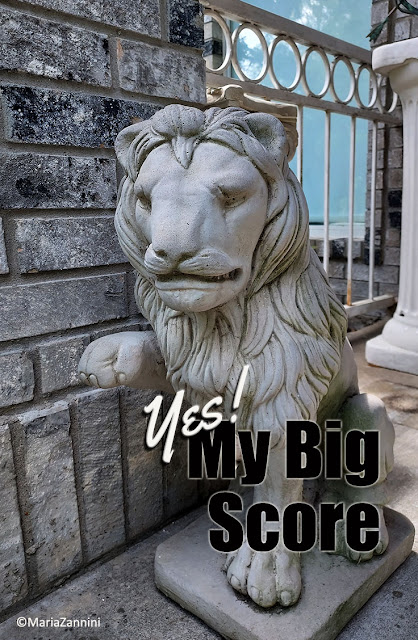 Over the weekend, I scored two large concrete lions for $25. I didn't realize what I was taking on until we loaded them.

Those suckers were HEAVY! I can lift 50 pound sacks of feed all day long, but each of those cats had to be at least 150 pounds or more. It was all we could do to lift them into the truck together.

It was another reminder that I wasn't a spry 50 year old anymore. It hurts the ego a little.

A smarter person would've turned down those lions, but I wanted them so badly. I paid for my avarice that very afternoon when my bad knee ached so much I had to lie down. Me! Lie down! Oh, the humiliation.

Surprisingly, Greg's new bionic knee worked great. I must admit he was stronger than me in the knee department.

We still don't have our quote yet for the floor replacement. The owner did say it was going to be expensive. I could see his eyes twinkle with dollar signs. We're long time customers so maybe he'll give us a break.

I'm a little worried over the prospects. If it goes over what I'm willing to spend we'll have to settle for the floor to be refinished rather than re-tiled. We shall see.

After two months of heat and drought, we got 10 inches of rain in ONE day. You could hear the trees and ground sigh in relief.

Dallas got flooded, but by us, the ground just sucked in all that water. At least all our lakes are refilled now.

After so much rain, the garlic and peppers resprouted. I cut back all the tomato plants and pulled out the strongest shoots to reroot in pots. I potted a lot of them, but all I want is one or two plants to hold us over during the winter.

My knee is still aching, but worth it. I haven't quite decided where my lions will live, but they'll get a place of honor.

What's the last thing you bought that you really, really wanted? Was it worth it?

Those lions are spectacular! I'd have done whatever too to get them. And I'm no spring chicken anymore either, but I'd have managed. Hubs' knee is great as far as lifting too. Can't dig a hole to save his life, but that's okay for now. Maybe after he gets the right knee done too.

Maria Zannini said…
Dru: Well, one could go at the front door. But I also have a flower bed in the front yard that could use some lion mojo.

Maria Zannini said…
nightmusic: My garage sale finds have been awful this year. This is the first nice thing I've really wanted.