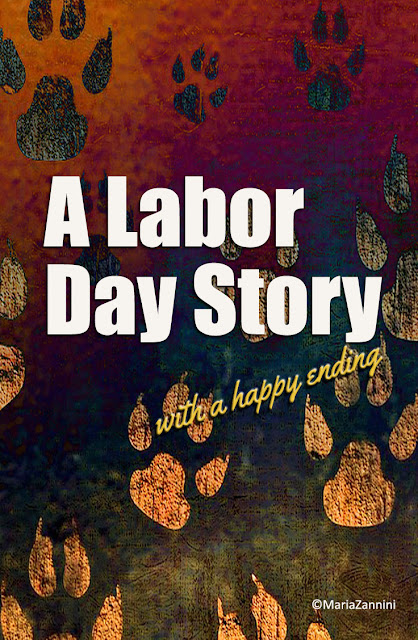 It's Labor Day in the US so I thought I would regale you with a story about my worst (and best) job.

Most of us migrate from job to job during our employed life. Greg stayed at the same company for 41 years. In fact, even when the company was bought and sold by five other conglomerates, Greg stayed with the furniture.

In the long run, his way was better. Staying on the job netted him a higher rate of pay while grandfathering him with benefits than those who drifted in and out of the company never got. Companies are very much aware that most people won't stay at their job. That dedicated behavior ended with my generation.

Today people regularly move from one company to another. According to Labor Statistics, most people average only four years at the same job.

Unlike Greg, I changed jobs often because there was no forward mobility in my field, at least until I landed my last job. Even then I got screwed. I applied and got my dream job in a different department at my company. I would work alone and in graphics. It was all I ever wanted. And the pay was great too.

The director called me a few days later and told me my director would not release me. Sometimes it sucks to be good at your job. I never forgave him for that. I would've stayed a lot longer at the company had they allowed me to change departments.

By far my worst job was when we moved to Texas. Jobs were scarce then and I unwittingly took the first job that came up. Telemarketing. :cue mass groan:

This was 46 years ago. Telemarketing was assertive, but not the brutal guerilla tactics we know today. I lasted exactly one week.

Firstly, I'm not a salesperson, but I have a great phone voice and that's what they were after. The selling I could tolerate, but not the smoke. Every single person in that office smoked. I would come home every night reeking of it. I needed the job, but I simply couldn't take the smell that gave me round the clock headaches.

I lasted the week only because I wanted a whole paycheck.

I hated that job with every fiber of my being. I wanted to be the dedicated worker Greg was but not at the expense of my health.

Fortunately, I found the perfect job for myself not long after that awful experience. I started as office help for a veterinarian. The vet was a cranky, old man who yelled at everyone, but he must've seen something in me because he decided to take me under his wing and teach me to be his surgical assistant.

I loved that job. And I still miss that cranky, old man. God bless you, John. Thank you for everything you taught me and your confidence in me. I've never forgotten it.

Today I'm retired and work harder than I ever did in my 40+ years of employment, but I enjoy it more because I work on my own terms.

Over to you. What's the shortest time you've ever been employed anywhere? Was there a job in your employment history you hated--or loved?

Angela Brown said…
Thank you for sharing this information regarding your experience. And hubby's.

Interesting tidbit I found out from working and chatting with many employees in the generation before me:
Loyalty from the company also ceased to be a thing, like a cycle of loyalty issues b/w company and employee. Most people I know in various industries only experienced better pay with the company they are with now due to exiting and coming back with a higher rate of pay to baseline compensation negotiations.

As for myself, a telemarketing job was my worst job as well, followed in a tight second by working at a bounced check collection agency. I only lasted a few weeks at the telemarketing b/c most of it was training. When they put me on the floor, it was a wrap for me in one day.

I worked at a telecommunications company for 14 years. I started on the phones assisting customers and worked my way to offline strategic support for Corp and government accounts.

Where I am employed now is great and I hope to be here for many years to come.

Maria Zannini said…
Angela: Our souls are too gentle for cut throat businesses. :)

In the case of Greg's company, new hires got a higher rate of pay, but they lost a very important element that Greg got to keep.

They got one percent more for their 401Ks, but no pension. That was a huge loss that they never knew the older employees kept. 1% more was no compensation for a pension.

Nowadays nobody offers pensions. That's going to make it really hard on people when they retire if they're not already good at saving for retirement.

the author said…
That was a great ending to an awful story -- and I can't imagine a better job for you than working with animals, pal.

My first job as a summer camp counselor's aide when I was 13 was definitely the worst. I was supposed to help a trained counselor, but instead she put me in charge of entertaining and safeguarding thirty 5-6 year old kids for eight hours a day while she and the other counselors sat in the air conditioned office and snacked and gossiped. This included weekly trips to the movies and roller skating, which she opted out of and sent me instead. Fortunately I raised my younger siblings while my mother worked, so I was good with kids. I worked five days a week, ten hours a day, and for my efforts was paid $100.00 (for the entire summer, not per week.)

Since that job I always advise parents to drop in at their kids' summer camps without notice to see what's happening to the children. I kept my kids safe and well looked after, but you never know.

I will say the parents of the kids really stepped up for me back then. They all knew how hard I worked (just not that I was the one in charge of their children) and tipped me at the end of the summer. I made over $300.00 in tips.

Mike Keyton said…
My worst job was night-shift at Minster Minerals. The job entailed filling the 'capping' machine as a million bottles passed beneath it on a conveyor belt. The jingling hypnotic dance of the golden caps and the clinking of bottles was made worse by the fact that I stood in front of a large clock that seemed unmoving.

If I'm given the chance, I try to be supportively polite to telephone sales people. It's one of the circles of Hell, Dante never wrote about
September 5, 2022 at 9:55 AM

Maria Zannini said…
Lynn: That counselor should've been drawn and quartered. Can you imagine if something tragic had happened with a less experienced teen?

It was great that the parents tipped you. You never hear people doing that anymore. I also hope they got that counselor fired. They were lucky to have you.

Maria Zannini said…
Mike: I hope at least it was a brewery so you could take some beers home at the end of the day.

Marlene Dotterer said…
My shortest job was a temp assignment at a company with a large outdoor work area. I don't remember what they did, but it must have involved machines - either repair or building something. Anyway, I was sent to replace the receptionist. This was very early in my new life as a divorced woman with five small children. My self-confidence was in the trash and I had not had a job in 12 years.

I'd been there about five minutes when the person training me told me to pick up the microphone and call the boss on the PA system. Just, "Mike so-and-so, you are needed Building B," or something like that.

I'd never been so terrified in my life. I picked up the mic with trembling hands, a tremble that was obvious in my tiny voice as I spoke the message. Thirty seconds later the phone rang. My trainer picked it up, listened, said something about a "temp worker" then hung up. She was apologetic, but I'd been dismissed.

No one was more relieved than I.

Maria Zannini said…
Marlene: That was an awful experience. I'd want to know why.

I can't imagine why anyone would expect a temp to be perfect the first time out. In hindsight maybe it was best for you, but I'm a little surprised at the boss.

Every so often we get a waitperson who fumbles our order (and once never put our order in). They're so nervous when they start out. We always try to be kind with newbies. All of us were new at something some time in our lives.
September 5, 2022 at 11:43 AM

Marlene Dotterer said…
I agree Maria, they should have worked with me. It's really a minor part of my history, as I don't remember any fallout from the experience. It amuses me now because I grew into a "ham" in two ways: I love the spotlight, whether it's giving a presentation or speech, running a meeting, or doing an author reading. I'm also a "ham" radio operator.

Unknown said…
My worst job ever was telemarketing too. I didn’t even last a week like you did. 2nd worst was for a bank. They designated a person to train me but wouldn’t. Every time I asked what to do she would say sit there and look pretty. I was too young and naive to complain to higher ups!
September 5, 2022 at 3:04 PM

Maria Zannini said…
Tell us your name, Unknown. You have me curious. :)

I often think about how people treated me when I was young and how often they would've earned a sock in the mouth if it happened today.
September 5, 2022 at 3:59 PM

Maria Zannini said…
Oh, Beth! There you are. I wonder why Blogger didn't recognize you.

Don't you want to go back and tell that trainer she was an idiot? I'd bet good money she did that deliberately so you wouldn't succeed.

Stacy McKitrick said…
I feel your pain about that promotion. I was working in Cost Accounting and the manager left. I asked about taking her spot and was told they weren't filling it. Then a week later, someone else from ANOTHER department got the job and became my boss. I was livid, and left not long after that (when I found a better paying job). My shortest job was my last one, by the way. Maybe 3-4 months long. I quit that better paying job (because I didn't like the commute) for this new one that was closer to home only to find out it was an "experiment that failed" and they let me go. No one told ME it was an experiment. I wouldn't have quit my other job for it if I had. Turned out to be the best thing to happen to me, though. I ended up getting published and have been much happier (and less stressed out) since. Hubby certainly likes that I'm free whenever he wants to go somewhere.
September 5, 2022 at 8:13 PM

Maria Zannini said…
Stacy: I get that companies have agendas, but that's no way to build a relationship with an employee if you want to get the most out of it.

Towards the end of my working life I started asking a lot of questions before I accepted an offer.
September 5, 2022 at 9:28 PM