The Cost of a New Floor 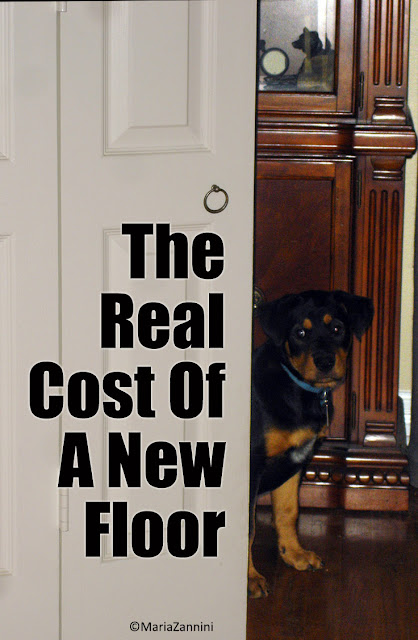 I'll admit I'm spoiled when it comes to home remodeling. Greg used to do these sorts of jobs for me all the time. I promised him after he finished the bathroom tile, I wouldn't ask him to do another.

While we were waiting for the estimate to come in, he started doing his "Greg thing" where he starts looking at a job followed by, "You know, I can do this for a lot less."

No, hon. Not this time. Flooring requires a lot of time on your knees and I cannot ask him to do that.

We waited for the estimate.

It came in between Ouch and Zing!

Ironically Greg's guess was very close to the total.

I spoke to the owner a few more times to see where we could shave off a little. Fortunately, his mother was in the office when we came in the last time and she gave us an additional $200 off for being long time customers.

When we got the estimate near what we had allotted we decided to go for it. It's costing us a bit extra because we're letting the workers move all the furniture.

Now we wait for materials and scheduling.

But WAIT! Just after the scheduler told us she placed the order for the tile, we decided we might like to have the whole living room and kitchen done and not just the kitchen. If we do this we probably won't have to refinish the wood floors on the other side of the house since its had less traffic.

So now I'm waiting for the owner to come back and remeasure the living room area.

Our house is basically divided in half. One half is a reception area, dining room and two bedrooms. The other half is the second living room, kitchen, laundry room, studio, and two more bedrooms. I keep the doors shut on the "guest side" of the house to keep the dogs from running roughshod.

Cost is cost when it comes to flooring. We've priced flooring several times with various sellers and they're all very close to one another. The real expense is labor.

There are ways to lower the price if only a little.

The real cost is the time and inconvenience involved. First, there's the time before the workers arrive where you squirrel away every little trinket, candle, or artwork so it doesn't get dusty. And then there are the things inside china cabinets and such that you want to remove so they can move the furniture safely.

It's very time consuming because you can't just toss everything in a pile. If it's precious or fragile you have to wrap it carefully and box it up and out of the way.

Then there's the time during the restoration where you're virtually trapped in one little corner of your house while people work. It wouldn't be so bad if it was just us, but I have two dogs that take umbrage at having strangers in the house. It's tough to keep them sane while people are hammering, scraping, or tromping back and forth with supplies.

It's going to make for a very long week for all of us.

And let's not forget eating. We won't have access to the kitchen during either installation or refinish.

Despite all these hardships, Jammy, the cat will have the worst of it. He's terrified of strangers. Secondly, Nana, our crazy border collie has taken a dislike to Jammy so they have to be separated. Thirdly, Jammy's food must be pureed. He may have to be on baby food for those few days.

Finally, let's hear it for poor Greg. As long as we're having the floor redone, I thought: Hey, I might as well paint the kitchen/living room first.  He was not amused.

I chose a soft gray. I really hope it was the right decision. I don't plan to paint these rooms again in my lifetime.

Greg only has to help me in one little corner of the kitchen where I can't reach due to a corner cabinet. The rest I can handle myself.

It took me 4 days last time.

15 years ago I repainted the kitchen/living room because the previous owner had (badly) painted it a dark brown. 60% of the house was this color. Don't ask me why. It was hideous and it took a lot of paint to cover up the overbearing color.

I painted it a soft putty color but it never felt quite right. It only looked its best in bright sunlight. Funnily enough, I couldn't afford shades when I moved in so the house was sunny all the time. LOL!

This go round, I decided to try something in the greige line to look more timeless.

Isn't it always the way that when you start one project suddenly there are complementary projects to go along with it?

Someday I'll write a post on everything we've done to this house since we bought it. We've tried to improve it with every project as time and money allowed. It's costing us a little more now that Greg is officially retired from remodeling.

You don't know how good you have it until it's gone. 😁 At least Greg is still around as my professional consultant.

Do you have a remodeling project you'd like to see done in the next year or so?

nightsmusic said…
Right now, we're in the midst of redoing our upstairs. Our modular home is modeled after the old farmhouses of yore that had a central staircase, which I hate, the master bedroom on the first floor (after 60+ years, I refuse to call it anything other than what it is) and the other two upstairs, one on each end with a hall between and the closets in the hallway. There are none in the bedrooms. They cannot be called bedrooms according to the State of Michigan. They can be called dens, living rooms, family rooms, studies, play rooms, closets, sitting rooms, storage rooms, anything you can think of, but they cannot be called bedrooms without a closet IN the room. We're putting closets in the rooms and redoing them, new carpet, paint, trim, etc. The bathroom between them will also be redone.

We did CaliBamboo floors through the house or I should say, Jimmy installed them. He was never on his knees. He sat in a chair. This was before his knee replacement. He couldn't have gotten on his knees if he'd wanted to.

As far as paint goes, the previous owners had to have gone to the big box hardware store and bought whatever unclaimed or wrongly mixed paints that were close to the same shade and painted every wall in this house a different color, all in some shade of green. I hate green. The only thing green you will ever see me willingly put in my house is a plant. Almost all of my house is now gray. Just a few walls left to go. Soon. Very soon.

The list of things we've had to do around here is as long as my arm, so I won't put it out here. Monetarily, it's cost us half again what we paid for this house. I will never do this again. This was my husband's idea of a purchase. I'll be putting my foot down on the next one.
September 12, 2022 at 9:49 AM

Stacy McKitrick said…
No remodeling project for me. Walls probably should be painted. They're ugly now, but I just don't have it in me to paint. I hate painting. The time to paint would have been before moving into this house (4 years ago), and we just didn't have the time to do that, so I live with the ugly because I don't want to move furniture.
September 12, 2022 at 11:00 AM

Maria Zannini said…
nightmusic: That's the same in Texas. It can't be called a bedroom without a closet.

re:paint color
It was funny what you said because a dear neighbor of mine likes really bright outrageous colors. She likes it so who am I to judge. She probably thinks my tastes are dull. :)

re: cost of remodeling
That's what it really comes down to, doesn't it?
We plan to live here until one of us die or we're too old to take care of the place, so I don't mind spending the money as long as I'm the one reaping the benefit.

But I hear you. We've been in homes that I knew we would never stay for long and I simply did not want to put money into a place I was going to sell anyway.
September 12, 2022 at 11:23 AM