Happy Day of The Dead 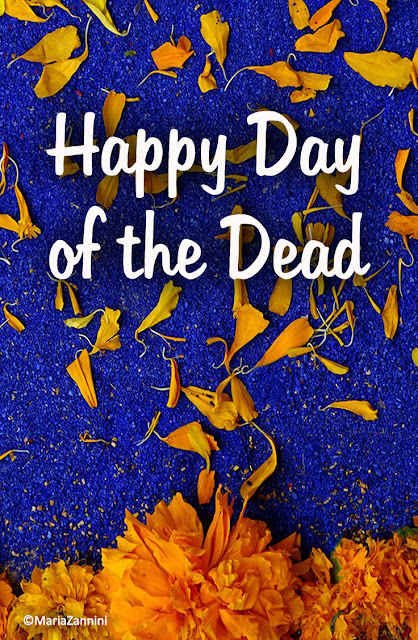 When I was a child, my father took us to visit his mother's grave. He gave us stern warnings that if we didn't stay on the path, serpents and demons would devour us. We heeded the warnings to the letter.

It didn't help that I've always been able to sense spirits since I was a toddler. Being in a graveyard was the worst. I felt like I was being watched.

As I've gotten older, the fears have dissipated. Most departed souls in my experience have been pleasant.

My most recent experience was early this year when an especially dear friend had died unexpectedly. Her family kept us updated on Facebook and I kept track of her progress faithfully.

One day I was elbow deep in suds scrubbing skillets when I felt a light hand squeeze my shoulder. I turned around and saw nothing, but deep in my core I knew it was my friend saying goodbye.

With wet hands, I immediately checked Facebook. There was no new news. I was relieved, but I couldn't shake the nagging feeling that she was gone.

But hours later her family updated Facebook. She was gone. I was both heartbroken yet honored that she came to say goodbye before she moved on. It touched me deeply and reaffirmed my faith that we are more than flesh and blood.

There are a lot of scientists purporting that nothing exists after we die.

I've never been so sure that they are dead wrong in this case. In the end we'll all find out.

In Mexico, the Day of the Dead starts November 2nd, also known as All Souls Day everywhere else.

Today, I wish you Happy Halloween! Celebrate and remember.

If you'd like a deeper look into El Día de los Muertos, might I suggest, Coco. It's a beautifully done film with great cultural insight.

Mike Keyton said…
That’s a lovely story, Maria. I think I might know who you’re talking about. I’m not looking forward to dying but I know it’s not the end
October 31, 2022 at 8:07 AM

Angela Brown said…
There are plenty enough mysteries in life to deal with. But I do not believe there is a nothingness when we pass on. While I do not rush to seek my death, I have long accepted it as the one guaranteed thing that will happen.

Maria Zannini said…
nightmusic: I'm always mesmerized at the moments between life and death. I try to be very still while someone is dying. That time is their own and I don't want to impede on their moment of transition. Once they're gone I can cry all I want. My only hope is that they find their peace.

re: animals staring
My stupid cat is always staring just above and usually over my left shoulder. If it goes on for too long, I announce loudly. "I'm hard of 'hearing', so if you want to leave me a message don't depend on the cat."

Almost immediately, Jammy stops staring and goes back to grooming himself.

I think most of us are capable of sensing spirits, but the majority don't want to so they pretend there's nothing there.
October 31, 2022 at 4:02 PM

nightsmusic said…
Maria, when I worked the step down at the hospital, we took all the ICU patients. Sometimes for only a couple hours before they were returned to ICU. Sometimes, they shouldn't have come to us at all. I hated when a patient was dying anyway, but especially when they either had no family or their family chose not to come and I'd sit with them. If they could talk and wanted to, we did. Sometimes, I just held their hand. But if I could help it, they didn't die alone. I think I'm pretty sensitive to things though. There's been to much unexplained in my life.
October 31, 2022 at 4:49 PM

Maria Zannini said…
nightmusic: 30 years ago, when my neighbor (as close to us as a father) lay dying, he was so frightened. We didn't know what to do but hold his hand.