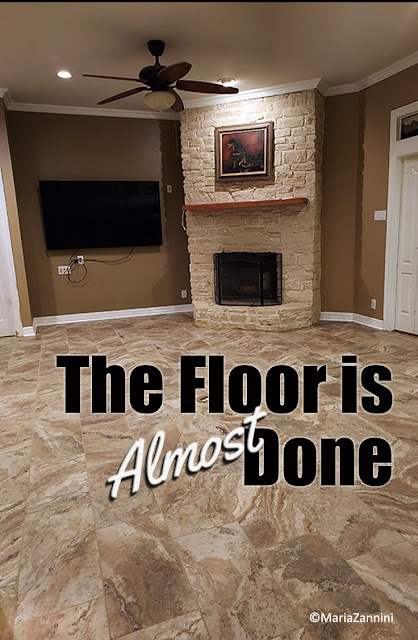 I was expecting a good deal of inconvenience during floor demolition, but by Day Four, I was exhausted.

They are in fact still working on the floor today. There's a little more molding they have to put in and then a final walk-through by the installation manager. 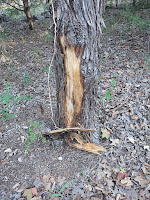 The demo crew did quite a bit of damage to existing molding and cabinets, but they did a good job repairing it. unfortunately, there's nothing they can do to fix the tree they hit on the way out. 😒
The floor itself is beautiful. I wish I could've been anywhere else during the chaos, but we had to stay to keep the dogs calm.

Amazingly, they took the ruckus in stride. They only barked or growled when the crew first arrived every morning. As long as they could keep an eye on us, they were okay with the army on the other side of the house.

As a matter of fact, Odin insisted on lying in front of whatever doorway they were closest too. He turned into a canine shield.

We warned the workers that if they ever needed to work on a threshold, to alert us first so we could play musical dogs and put them elsewhere.

For the most part, we stayed on one side of the house and they worked on the other. It left us with two bathrooms but no kitchen. Eating was a hassle, but cleanup was a nightmare. Whenever possible we ate off paper plates so I wouldn't have to wash dishes in a tiny bathroom sink.

I dropped the ball on food. Thinking they were exaggerating and this would only be a five day job, I planned on cold sandwiches for lunch and eating rotisserie chicken and ribs for dinners. Without a stove top the best I could do for breakfast was toast. Greg opted for donuts and kolaches. Not the healthiest of meals during our incarceration. 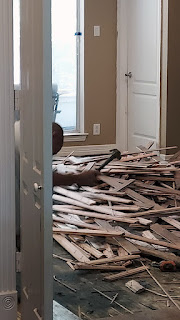 By Day Six Greg started grilling our dinners and we had to eat out more often since I was out of food that I could cook in a toaster oven.

I knew it was a big job, but I didn't realize how much was involved just to prep the floor for tiling. They did an amazing job. Every tile was perfectly straight and level--save for one tile in the pantry. To be honest only I noticed it (nitpicky as I am). Greg thought it was nothing.

The numerous thresholds were very pretty hardwood transitions, not the plastic ones you see in most places.

I hope by the end of the week we can start moving the fridge and furniture back into place. I'd like to have my life back. I'll try to post next week, but we'll see. I have a lot of molding to repaint and wall touch-ups where they nicked or scraped while they gutted the place.

Meanwhile, I'm grumbling as I write this because we just came home from grocery shopping. Prices are beyond ridiculous. I read today that the stock market has wiped out 9 Trillion dollars this year alone for US households. I don't even want to tell you how much we've lost of our retirement savings. It's shameful how this government has mishandled the economy.

Now that the floor is done our plan is to forego eating out entirely. We still have to do Odin's eyes, so that's our primary goal at present. His right eye is starting to bother him again. I don't think we can wait much longer. I need to talk to the specialist on when we can schedule surgery.

How's it going by you?

Although prices are high everywhere these are a few things I've bought recently that are good value.

nightsmusic said…
I won't tell you how much we've lost either. It's just too depressing. We may eventually have to move in with our kids if this goes like the 90's debacle did. I keep hearing people talk about the 2005/8 recession. They have no clue. They're obviously too young. We lost 3/4 of what we had and it never really did come back. Not all the way.

It makes me sick to have to buy groceries. My bill has now more than doubled. I'm buying only what I have to have, nothing more. We're getting colder so the farmer's markets are closing down and that limits my possibilities, I'm looking for a good co-op but they're quite a way from me and they don't have veggies in the winter either. I may have to bite the bullet and buy half a cow.

When we remodeled the kitchen two houses ago, I used a rubbermaid container and dish drainer in the bathtub. It was just easier that way. I didn't have a sink big enough to wash anything in and my laundry room was in the basement. That wasn't going to happen, dragging dishes up and down stairs.

Maria Zannini said…
nightmusic: It's getting to the point I'm seriously considering going back to work.

re: washing
I would've used the tub, but man I hate having to do dishes on my knees.

Speaking of knees, Greg tried to kneel the other day. Although it hurt, he was able to kneel (on an extra thick foam pad). That was a great new development.
October 24, 2022 at 8:31 AM

nightsmusic said…
Maria, Dr told hubs he'll always have to use some kind of ultimate padding in order to kneel, and not for very long, but it can be done, so there's that. We're going for an appointment in January to set up having his other knee done in March of next year. He didn't realize how bad the right one was until the left one was good again. The only thing he still has trouble with is uneven ground so our two son in laws helped with a huge load of wood last week, but he can split and stack it because it's flat where we keep it.

I pulled a little stool up to the tub and sat on that. I can't kneel at all. I had my knee reconstructed in 1980, thanks to my ex trying to kill me. Even if they did replacements then, I was way too young to be a candidate, but I can't kneel on that knee now at all, never really have been able to, even with padding. So the stool worked for me.
October 24, 2022 at 8:41 AM

\I made the mistake at looking at my retirement fund and it really pissed me off that I lost that much money. I'm hoping for a rebound since I'm two years away from retirement.
October 24, 2022 at 9:14 AM

Maria Zannini said…
Dru: It's sickening, honestly. How do they expect people to live when our life savings are drained away? I didn't work 40+ years to end up like this.

On the up side eventually it will rebound. The real question is how much will we lose before the recovery?

Mike Keyton said…
I’m glad the nightmare is reaching its end —- the floor that is. I feel sick for you ref your savings. To the bottom of my stomach
October 28, 2022 at 7:03 AM

Maria Zannini said…
Mike: We went through this before in 2008. We hadn't retired yet so we were able to save again. This time it's different. The proverbial rock and hard place.
October 31, 2022 at 9:23 AM