Eye Surgery on a Dog 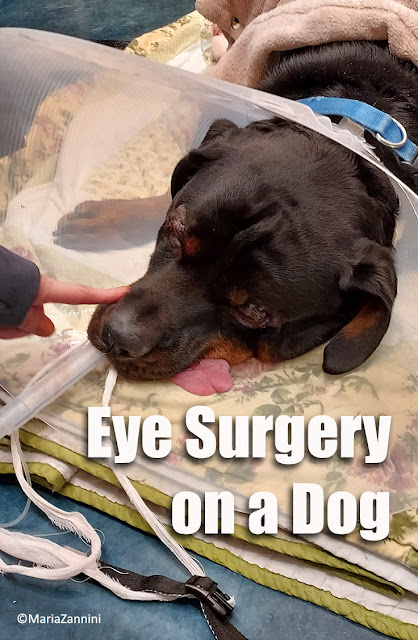 Odin recovered remarkably fast considering they gave him enough drugs to put all of The Rolling Stones to sleep.

Even the vet remarked that the dog had incredible stamina. They gave him a full dose of the drug that was supposed to make him drowsy enough to intubate him. After 45 minutes he was still plenty bitey, so he gave him a much stronger dose of something else.

Finally, he went down.

They called us two hours later to be on hand when they were ready to give him the reversal drug.

When I first saw him, my heart broke. He looked like he was on the wrong end of a fight. His eyes were angry and swollen, and once he was revived he was moaning in pain.

I got a pharmacy load of pills and drops. Odin is not a cooperative dog most of the time, but if mom gives him pills he knows to swallow. I have no fear putting my hands in his mouth. I've taught him since puppyhood that he should always let me handle him regardless of what I did.

The cone (of shame) was the biggest obstacle in his recovery. Usually I would've opted for the soft inflatable collar--which I highly recommend, but he couldn't use that for eye surgery. It would be too easy for him to scratch his eyes.

For the first few days I had to hand feed him and give him water. The small water bowl I offered him freaked him out so he drank very little. It forced me to fill up a large syringe and feed him water by the ML. I didn't want to risk him getting dehydrated.

By the fourth day he learned to manage his cone for eating and drinking.

That was also the last time I had to get up at 2am to tend to him. As I mentioned on Facebook, once I'm up, I'm up. There's no use going back to bed.

The eye specialist did a remarkable job. It was basically a realignment of his eyelids so his lashes didn't scratch his eyes. There was considerable cutting. It was a half-moon cut on the outside of each eye and then suturing it so his eyes opened up more.

We get to remove the cone this week. He needs to go for a post-op visit, but that vet was 2 hours away on a weekday. I might get my vet to look at him (from a distance). He still hates vets.

An interesting side note: While we were waiting for Odin to wake up enough from the anesthetic so the surgical vet tech could extubate him, we apologized (again) for Odin's bad behavior.

She said she's seen a lot of it this year. She too, thinks it has to do with our imposed isolation. Many dogs were never properly socialized during that critical puppy stage.

She's seeing it a lot in dogs Odin's age.

I'm glad it's not just us, but it's doubly hard because he's so big and powerful.

I'm hoping this will be the end of his eye troubles. It bothered him terribly and it was always giving him infections.

It might sound superstitious, but I hate doing surgeries so close to the holidays. We've lost many a dog around this time of year. I always try to be extra vigilant when the holidays roll around.

Despite the extra steps we had to take, I'm hoping this will be the start of a better year for us.

To my US friends: How was your Thanksgiving? What plans do you have for Christmas?

Christmas Favorites: These are all items I can vouch for because I've either received or bought them myself.

Angela Brown said…
Sounds like surgery went well. Very glad to hear that and that Odin is healing well.

Keeping my holidays fairly quiet this year, meaning I enjoyed a relaxing Thanksgiving at home chilling with Molly and intending the same for Christmas, encouraging my kiddo and her dad to enjoy the holidays together.

Maria Zannini said…
Angela: Truth be told I actually prefer the quiet holidays where I don't have to put out a spread. I'm not fancy. :o)

Beth Anderson said…
We had a lovely dinner at Heathers. We are doing Christmas quietly with little fanfare. Happy to her Odin surgery went well. Love you guys. Have a great week and blessed Christmas. Beth
November 28, 2022 at 10:00 AM

Maria Zannini said…
Hi Beth! I like the quiet holidays. Just a couple of friends or family. Makes it feel more homey.
November 28, 2022 at 10:39 AM

Mike Keyton said…
A remarkable account, Maria. I felt I was there, and I’m glad that Odin seems well on the road to recovery - as are you and Greg, I hope. Our Christmas will be quiet, just family and bags of food and drink. Duck for my birthday. I’m salivating, so I’ll stop now 😎
November 28, 2022 at 11:46 AM

nightsmusic said…
So glad the surgery went well. Not sure which is worse, honestly. A big beautiful boy who needs and can work on socialization or an old man who has developing dementia and stool incontinence who's newest spot is smack dab in the middle of my white rug and who manages to Not be incontinent until I remove his diaper or he gets it off himself. *sigh* And he walks while going...

Thanksgiving was...interesting. Too many things going on right now. Have no clue what Christmas will bring. Maybe funerals. They have before. We'll see. Hope things are quiet for you guys and Odin cooperates and heals up.
November 29, 2022 at 12:14 PM

Maria Zannini said…
nightmusic: Oh, sweetie. It sounds like you've been carrying all the luggage lately.

Holidays seem ripe for funerals, or maybe it's because we remember them more.

I hope things calm down. My sister has to hire someone for her husband. It's not all the time, just when she has to leave for work. It gives her a tiny amount of rest, but never enough to recover.

nightsmusic said…
Maria; no, it's a really bad thing being the caregiver. I buried my mother Christmas eve morning many years ago now, so I have a love/hate relationship with this holiday. My father fell apart and never really recovered so I had him to care for along with two small, really small children and my husband. My dad has been gone a long time now, but my husband's father is failing so who knows? Only time will tell. I don't know if he or the dog or who will be here by the end of the year at this rate. Merry Christmas...
November 29, 2022 at 2:08 PM

Jenny Schwartz said…
I am so glad Odin came through surgery so well. Here's for a speedy recovery. Those cones of shame are both incredibly useful and horribly troublesome! Please give Odin extra cuddles from me.
November 30, 2022 at 4:27 PM

Maria Zannini said…
Oh, Jenny. He took a turn for the worse this morning. The last suture fell out and one corner of a lid started rubbing his eye again. We have an appointment tomorrow to see what the next step should be.