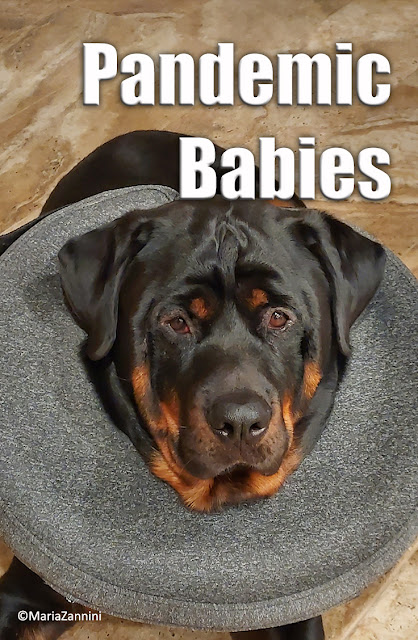 Poor Odin had a reversal of fortune. The left eye turned out fine, but his right eye did not want to cooperate.

On the last day of his two week recovery that eye started to hurt him. I immediately called the vet for another appointment. They got us in the next day.

As usual they had to pump him full of drugs including the anti-anxiety meds I had already given him.

He went down fast this time. (They know how hardheaded he is and didn't mess around.) The vet examined that eye thoroughly. Another, very superficial ulcer had formed.

I had suspected this a week earlier and switched antibiotics after consulting them. Doing this saved him from having a more severe ulcer.

Just so you know: Neo-Poly-Dex is a great antibiotic for the eye, but never use it if you suspect an ulcer. It makes it worse and it could burst the ulcer. Ask about Oflaxacin instead.

He normally would've used the sutures you have to remove, but he went with the absorbable sutures to avoid having us make the long trip back and knocking him out again.

We had two options. Surgery to realign the lid or a nonsurgical attempt to give his eye time to heal on its own.

He wanted to try option two. He applied a contact as a sort of bandage to the ulcer. He also had his tech clip Odin's eyelashes. Then...and this was also new to me...he injected collagen into Odin's upper lid to plump it up and draw it away from his eye. Yes, collagen--the stuff those celebrities use to have lips like Mick Jaggar.

We have another two weeks of recovery. If this doesn't work he has to go in for surgery again.

I can't say yet if this will work. I was so worried for him the first night. I'd never seen him so miserable. But he seemed to feel better the next day.

For now I'm hoping the contact will stay in and the antibiotics will heal his infection. If after these next two weeks it still bothers him we'll bring him in for an adjustment surgery.

It shouldn't take but a few minutes, but the long drive and the knockout drugs makes him so terribly miserable. I wish I could spare him anymore of these journeys, but we have to get this fixed.

While we were waiting for the vet, I spoke to another vet tech and she was telling me her dog was the same as Odin. She got her as a puppy during the isolation, and just like Odin, she is very wary of strangers and abnormally protective of her.

She said it's a very real phenomenon. At the clinic, they call them Pandemic Babies, dogs who never got to see anyone other than their families during that critical learning stage.

She's found that even young children who were toddlers during the pandemic have the same reticence to strangers. Like puppies, they never had the chance to socialize and learn how to cope with people outside their intimate circle.

I think the damage is done but once Odin's healing is over we're going to try and take him out more to  public places to see if it will help him relax a little more with strangers.

Send me good thoughts for my poor Odie. He's been through the wringers this time.

Have you ever heard the term Pandemic Babies? Have you seen it personally?

Jury duty: I report tomorrow for Federal Jury Duty. I'm really bummed about it because I have to drive into the big city to an area that's both unfamiliar and congested. Dallas drivers get very irritable if you slow down in front of them, so I'm prepared for honking and cursing. It can't be helped. I really don't know my way around the downtown district and I have to find an all day parking lot within walking distance to court.

Blog and upgrades: This one is going to be a headache. I have no choice but to upgrade Windows to version 10. Being the cautious type I started researching how this was going to affect Photoshop and Word. If I uninstall them prior to the upgrade, then reinstall them after the upgrade, theoretically, I should get them both back.

But a Google search turned up plenty of people for whom this didn't work.

Just in case that happens to me, I am migrating important email to Gmail (since I won't be able to access Windows Outlook). Next I'm backing up my whole computer and moving files to an external hard drive in case the whole thing crashes.

Then I'll uninstall my programs and hope for the best.

If it works, peachy. If not, I have enough blog posts and pictures loaded for two more weeks. After that I need to decide what my next step should be. I can't afford a subscription to Photoshop and Microsoft. There are less elegant software to replace them, but I'm not sure I want to go there.

So in any event, wish me luck with Odin, jury duty, and my computer.

Unknown said…
Oh my. Poor Odin. So sorry you have to endure all this. Hope this new procedure works. Praying for all of you. Would love to give you a hug.
December 5, 2022 at 9:57 AM

nightsmusic said…
Poor Odin and Poor You! I know how terribly hard it is for everyone involved to go through this. :(

You'll have to do it before you upgrade Windows 10. I don't know that you have to install it prior though. Read through, but worth a look. It came through my newsletter from them last month.

Hubs was on the list for federal jury duty for three months. Twice a week he had to call in. It would have required a drive to either Detroit, Flint, Lansing or Grand Rapids (three hours from us!!) if he was required. Thankfully, they didn't end up needing him but come on! Grand Rapids??? Who does this stuff??

Mike Keyton said…
Odin must be so aware of the love surrounding him. All the best of luck, Maria, and may your Guardian Angel be on the ball
December 5, 2022 at 12:48 PM

Maria Zannini said…
Beth: I do hope it works. He wears the contact for two weeks, but I won't know if his eyes healed properly until his puffed up eyelid comes down to normal. Not sure how long the collagen will last.

Maria Zannini said…
nightmusic: Thanks for the link. I'm adding it to my resource folder in case this doesn't work.

re: jury duty
I'm hoping I can make it in under an hour and a half. It all depends on rush hour traffic which I'll catch coming and going.
December 5, 2022 at 2:16 PM

Maria Zannini said…
Mike: I've always tried to make the dogs feel safe around me. It's the only reason they allow me to touch them when they're hurting. If I could have any wish, I wish I had the ability to talk to my pets so they know I won't let them down and they don't have to be scared.
December 5, 2022 at 2:18 PM