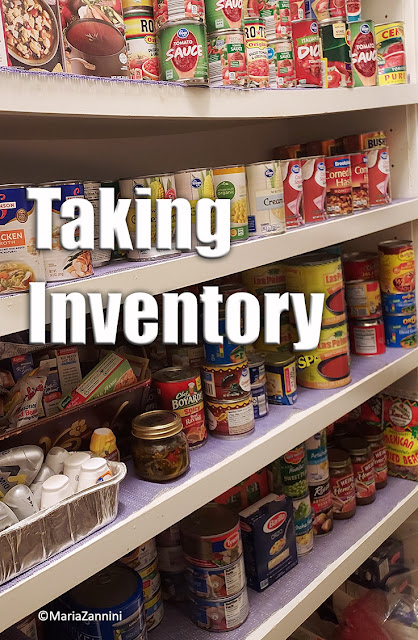 Every once in a while I like to take inventory of what I have.

I might check how many seeds I have, or how much dog and cat food is in reserve.

I have never taken inventory of all my food supply. It was eye-opening.

The pantry was first. Everything had to come out anyway because when the floor installers were taking out the old floor there was dust everywhere. It was a good time to clean and take inventory.

The good news: I had only two packages of bread mix that had expired. The mix itself looked fine, but I threw away the yeast that was included and used fresh yeast.

The only thing I was dangerously low on was black pepper. How that happened I'll never know. We use a lot of black pepper so I'm used to keeping it in stock. Apparently I dropped the ball and we were nearly out of the last bottle.

I have another "pantry"-- a set of shelves in a climate controlled room off the garage. Stored here are things like extra pet food, drinks, paper, plastic, and aluminum products. All of it catalogued for posterity.

Finally, it was time for the freezers. Technically, I have one upright freezer, and the small freezers in two refrigerators.

I set up a card table so I could clear each shelf to see what I had. I was a little low on chicken, but that's because it's been so expensive lately. I had a nice supply of quail to last until next breeding season.

This was probably the hardest part of taking inventory. That stuff is cold and you have to move fast to keep it frozen. Greg helped and we made it a tag team effort. Anything that was a year old was left out and I cooked that first.

I've always been very good about labeling and dating so it was easy to keep track. I put each type of meat or poultry on its own shelf, so we don't have to keep hunting.

Other than the black pepper, I was pleasantly surprised at our bounty and that I had been pretty good about keeping stuff rotated.

Once I tallied everything, I copied it over to a Word file. To keep better tabs, I am now updating the file whenever I use something from the pantry or freezer. I'm bound to forget something at some point, but for now I'm up to date.

The only things I didn't inventory was anything in the fridge. That's because the products in there are used up generally within a week.

To put my inventory to work I still use  Super Cook, Zero Waste Recipe Generator. I patiently clicked on every ingredient I had on hand to save it to my profile. You don't have to do this, but it's handy.

The other nice thing I like about this app is that you can simply put one ingredient in their search engine and it will give you a boatload of ideas that uses that one ingredient.

Sometimes if I have a veg or meat I haven't used up yet I use this app for suggestions.

I'm hoping developing an inventory will not only keep my from being without a necessary ingredient but also prevent me from buying too much of one thing or another.

We'll see how long I can keep it updated.

Have you ever done an inventory on your pantry?

Maria Zannini said…
Dru: That is so smart!

I'm hoping now that I have an inventory list, I can keep it updated.

Mike Keyton said…
Were you a quartermaster in a previous life? I’ve never seen or call me across such a well stocked pantry before. You could feed Napoleon’s bloody army ��. But running out of black pepper. Unforgivable
December 23, 2022 at 11:13 AM

Maria Zannini said…
Mike: It took me years to get to this level.

After Hurricane Rita, I concentrated more on the pantry than the freezer. We lost everything that was in the freezer. And while insurance covered the loss, it was still loss nonetheless.
December 23, 2022 at 2:13 PM

Maria Narkis said…
So I actually have a clipboard in my pantry with everything I have there. And any time I take something out I put a mark next to it -- which means I need to buy it to replace what I used. It's an instant shopping list :-)

Sometimes I buy things before I need them because they're on sale, or wait to buy because they're too expensive, but it's an easy and instant way to keep track of what I use.

Maria Zannini said…
I'm going to print out my list and try that. Or at the very least do what Dru does and jot down anything I've used up.