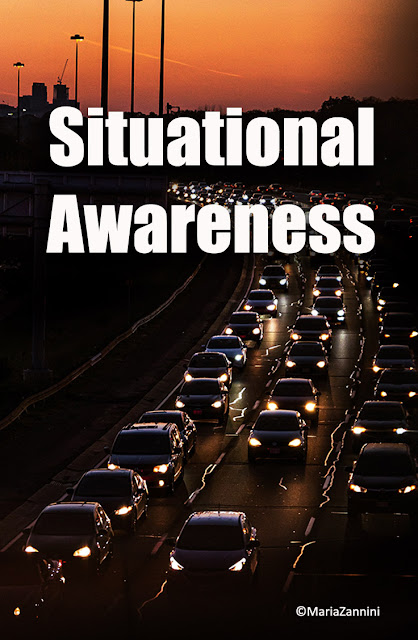 A few weeks ago when I was called to serve on a Federal jury I was stressed. Not because I had to serve but because of the location.

Dallas is a pain in the keester most days if you have to get from point A to point B, but navigating downtown is a beast.

As a rule I'm clueless (truly clueless) when it comes to situational awareness. That's because Greg is usually with me. He's my radar while I use GPS to find us a restaurant we both like.

This time though I was alone. It surprised me a bit that I stopped acting the bystander and became "Jason Bourne's" grandmother.

Dallas isn't as congested as New York, but it's on par with Chicago. No great walls of people but walls of cars in every direction. I had my GPS on because I didn't know where the federal courthouse was. But my biggest handicap was finding an all day parking lot.

There are lots of them in downtown, but I needed one within walking distance of the courthouse.

I lucked out. There was one (with available parking--woohoo) behind the federal building.

Rule #1 of situational awareness: Arrive early. I left extra early not only to fight rush hour traffic, but to give me time to find parking. When I got there, I was told by a regular that I was lucky. This particular lot fills up early.

Sometimes, when I had to be on unfamiliar ground I often surveyed the area on a Sunday before the event so I could get the lay of the land. Dallas was too far a drive for reconnaissance so I decided to rough it, and go early.

Rule #2: Pay attention to what's being said: During orientation, a lot of instructions were being given, but one made me raise an eyebrow. The court clerk said that if an alarm goes off to follow the bailiff to a secure location. This begs the question, just how often do alarms go off that you need to be escorted to safety?

At this point I was looking around at my surroundings. The first floor was easy. There were exits everywhere. The kicker is when they took you 15 stories up to the court room. We were not allowed to take a single thing with us. All our belongings were placed in labeled plastic bags and locked in an office.

Rule #3: Look for resources: Once again we were taken through more security on the 15th floor. I'm looking for exits, offices, and things to hide behind in case of an active shooter. What a world we live in.

I was surprised when a couple of potential jurors gave the bailiff a hard time and wouldn't follow instructions. They were real jerks.

The bailiff had been very kind and respectful up to this point, but when these two characters started acting up the bailiff turned into a force of nature. She got them in line very quickly. I was both pleased and entertained at her ferocity.

Your resources can be tools, exits, and people who know procedures and the layout of the building.

Rule #4: Improvise when necessary: This is where you have to think outside the box. In a building, there's some safety, but on the road I had a very long way to go to get home.

As I was stuck in bumper to bumper traffic, it was getting dark and the roads were damp. Not the best driving conditions. Puttering along at 30mph, my brain started fixating on how dangerous it was to be stuck on this massive highway with no way off for a mile in any direction.

What if we had been struck with an EMP? All the cars would die on the road and there would be no cell service.

What if there was a dangerous chemical leak from a tanker truck, or a tornado came through?

I'm reminded of the tornado that ripped through only a few years ago and yanked eleven people off an overpass to their deaths.

As implausible as some things seem, there's always a chance for the worst case scenario.

That's when I started thinking about what was in my car. I have an emergency kit, a small medical kit, basic tools like a knife, screwdriver and adjustable wrench. I also have a light jacket, reusable shopping bags, and my trusty cane.

Although neither of us are lame, I like to keep a cane in the car in case we need to do a lot of walking. Without transportation, I estimate it would take me two days (counting breaks) to walk home at a slower than normal pace.

If I found a bike, it would make the trip that much shorter.

I deliberately try to stay away from situations that make me vulnerable, but sometimes they can't be helped.

I've never liked living in the city. It's crowded, noisy, and crime is commonplace. Not that living in the country doesn't come with its own challenges, but I like my odds better here.

Rest: Get some rest before a big day. Nothing makes you sharper than a good night's sleep.

Meds: If you take meds always take an extra set just in case you're stuck at work or away from home longer than you expect. Aspirin or anti inflammatory medication is helpful too.

Cash: I was in a restaurant the other day that could only take cash because their machine had been down for two days.

Contact information: In case you lose your phone, or it stops working for any reason, keep a contact list on your person so you can contact someone, or for people who can help you if you're incapacitated. Any medical issues should be on your info list too.

The next time you're stuck in traffic or in the office, think about your exit strategies. How would you get away (or where could you shelter in place) if all you had was whatever you could carry?

Would you wait for help or strike out on your own?

In brighter news, we got some more results from Odin's labs. They could not find cancer cells. I am beyond relieved! For now we're going to treat it as an infection to see if we can reduce the size of the growth.

Odin is on high doses of antibiotics but they're a little rough on his tummy. I'm going to reach out to the vet later today to see if we have other options.

Angela Brown said…
Glad for the good news regarding Odin. That is wonderful. Truly hope he feels better soon.

I was introduced to the need for situational awareness - though I didn't take strong heed at the time - during a road trip from TX to GA a lifetime ago. This was before GPS was the norm and maps were the best. We learned, the hard way, some gas stations weren't safe, even with a man in the crew. Detours can be super scary when they take you into the back woods of the back woods but knowing you have a safety kit in the trunk gives some comfort.

Glad you were able get to your summons early, got great parking, and had what sounds like a no-nonsense baliff.
January 16, 2023 at 8:53 AM

Maria Zannini said…
Angela: Ahh, the good old days of paper maps. Sometimes I miss them, especially when the gps turns out to be wrong or there's no wifi.

Maria Zannini said…
Dru: It felt like a huge weight lifted off my shoulders. We still have to treat this massive growth, but at least it's not cancer.
January 16, 2023 at 1:14 PM

nightsmusic said…
I'm glad to know things worked out well for you in the overall scheme of things! I was called to jury duty Downtown Detroit once. It would have been a minimum of a four week murder trial. There is zero parking unless you get there two hours early. I was not happy that this was my fourth time called in less than two years which is against the regulations here, but they don't care because people don't want to go. I had two small children at home and no child care and a sick father where I was the caregiver, they didn't care about that either. So, when the defense lawyer started a song and dance about how the defendant would be splitting his infinitives and had had a rough life growing up and a tough time in school and did any of us think that as a juror, that would make a difference in our opinion of him I raised my hand and said if he was born in this country, he should be speaking in English and you betcha. They excused me. Six months later when I got yet another summons, I threw it in the trash. There's no way they could prove I received it. I'd had enough. I am not a peer, I was losing my mind with what was going on in my life, I'd dutifully showed up every time prior and that was enough.

As to your drive home, we were just sitting down to dinner Christmas eve when our son in law's phone rang. This was the call. His aunt, two cousins, the one cousin's husband and that cousin was also pregnant. You never know. The other cousin, riding in the car with her mom was also our daughter's best friend. So five dead in two vehicles because the truck driver was driving illegally and under the influence at 8:30 in the morning.
https://www.10tv.com/article/news/local/ohio/fatal-crash-in-shelby-county-prompts-closure-of-i-75-southbound-lanes/530-386e1849-f420-4f8b-bb25-6dae23a59d99
January 17, 2023 at 3:36 PM

I hate "the call". The worst one I ever got is when they called me to say Greg had been in a terrible accident at work. I know the manager was nervous, but he was telling me everything about the accident except what I wanted to know.

I finally stopped him and asked point-blank: "Is he breathing?"

After that I could make decisions more clearly. But the call...you never forget the call.

As you say, you never know.

As I was reading all your "what ifs," I thought that maybe you need to write another book. You'd probably write a good dystopian or disaster story (like those old disaster flicks).

When I'm traveling, I don't think worst case scenarios on anything. I think it would give me an ulcer if I did. If something happens, something happens. I'll deal with it then.
January 18, 2023 at 8:05 AM

Mike Keyton said…
Crikey, it’s like reading a Jack Reacher novel. I was feeling the tension 😎 what trial have you been called for?
Like everyone else much relieved about Odin. You might enjoy this vintage comedy on jury service
https://youtu.be/N1dq_8I7ySw

Maria Zannini said…
Stacy: No one was more relieved than me. With the luck we've been having with that dog, I was sure it'd be cancer.

The growth seems to be receding. I need to check how much longer she wants him on high doses of antibiotics.
January 22, 2023 at 9:21 PM